The Mixed Lymphocyte Reaction assay (MLR) is a highly customizable assay used to illuminate many activities of cell-based systems. MLRs are one of the primary in-vitro assay formats to investigate the immunomodulatory potential of new drug candidates or to gauge the relative immunogenicity of novel cellular therapies. The MLR can also be used for screening in discovery / preclinical stages as it provides valuable information about the efficacy and mechanism of action of your product. MLRs are an effective in-vitro model to assess lymphocyte activation, inhibition, or alteration of function; furthermore, the customizability of the assay allows us to investigate interactions and responses of specific lymphocyte subsets and better identify which cells and under what conditions your product is most active.

Xeno Diagnostics offers a comprehensive selection of MLRs and co-culture experiments to test your product. We have designed MLRs for a wide range of applications including immuno-oncology, transplant immunology, and regenerative medicine. We can help you fine-tune your cell-based experiment to pin-point the system and processes you are looking to characterize. We offer both basic MLR assays to initially screen your product, and fully customized MLR assay to fit your specific needs. We specialize in custom assays and work hand-in-hand with our clients during experimental design to ensure that data generated is pertinent to their exploratory question or regulatory requirement.

Lymphocytes are type of white blood cell and are one of the most essential components for your body’s immune response. Unlike the cells of our innate immune system which can only respond to a limited number of infection types, the majority of lymphocytes act as part of our adaptive immune system and can quickly identify, adapt, and fight any new type of infection if given enough time. Additionally, lymphocytes of the adaptive immune system can remember old infections and respond quicker and with a greater response if that type of infection is encountered in the future. Understanding our how our adaptive immune system is works is critical when developing new therapies and treatments against ever-mutating viruses, new diseases, medical conditions, and types of cancer. Mixed Lymphocyte Reactions (MLRs) are a great laboratory assay to help us understand how these newly developed medicines interact with our immune cells and can provide researchers valuable information on the mechanism of action, efficacy, and safety of their product.

At its simplest, MLRs are comprised of at least two cellular components (lymphocytes) mixed together in a co-culture. In a one-way MLR, one group of lymphocytes act as a stimulator and another group of lymphocytes as a responder. The stimulator lymphocytes are often treated with a drug (or irradiated) to prevent them from proliferating or from mounting an immune response. This means that when we analyze the MLR, the only lymphocyte activity will be from the responder group. The other type of MLR is a two-way MLR, where both groups of lymphocytes act as both responders and stimulators against each-other. Two-way MLRs are a good way to get a basic understanding of how a therapeutic product affects lymphocytes, while a one-way MLR allows us to dive into greater detail on the effects in one lymphocyte group and account for differences between the stimulator and responder lymphocytes groups (such as allogeneic donor variation if cells are from two different human donors).

In addition to one-way and two-way MLRs, there are variations on the types of lymphocytes and other cells we can use. We often make use of Peripheral Blood Mononuclear Cells (PBMCs) aka white blood cells, which are comprised of a many different innate and adaptive immune cells, including lymphocytes. We can use PBMCs to get a general idea of immune response, or we can isolate specific cell types to further investigate and narrow down the immune responses to the cells which are the most critical for a given therapy. One such PBMC subset MLR we perform is a dendritic cell + T-cell MLR. Dendritic cells are an Antigen Presenting Cells (APCs) which present a foreign antigen (a small molecule or protein that is derived from the foreign invader that our body is trying to fight) to T lymphocytes (T-cells). Once a DC cell presents the antigen to the T-cell, the T-cell becomes activated, proliferates, and starts acting to help clear the infection. As such, the DC/T-cell interaction is a useful model to probe the initiation of an immune response and investigate how a therapy affects this response.

Types of MLR’s and Readouts 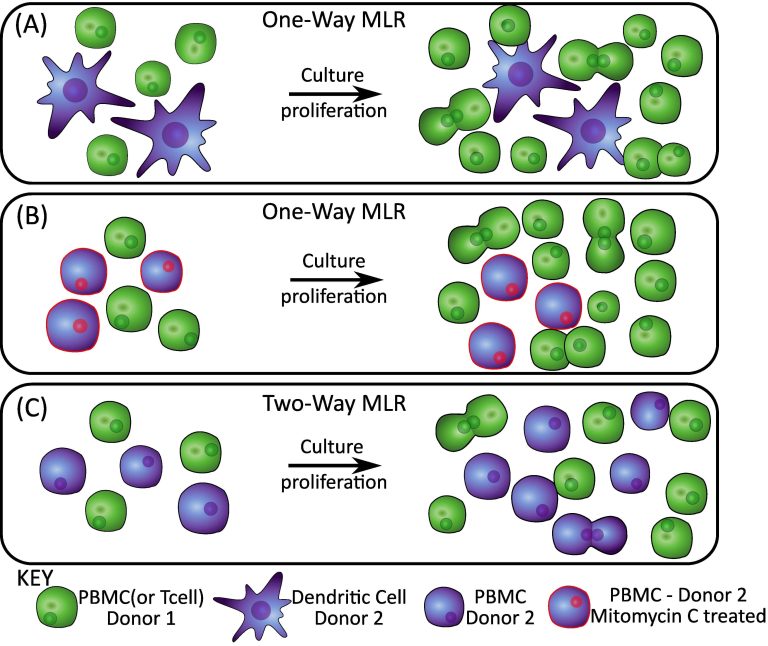 Readouts from the MLR are selected depending on the mechanism of interest. See Figure 2 for some of the most common readouts. Xeno Diagnostics has a suite of readout options tailored to common mechanisms of interests. We work with our clients to design experiments with these readouts in mind and we assist with data analysis and interpretation on the backend. 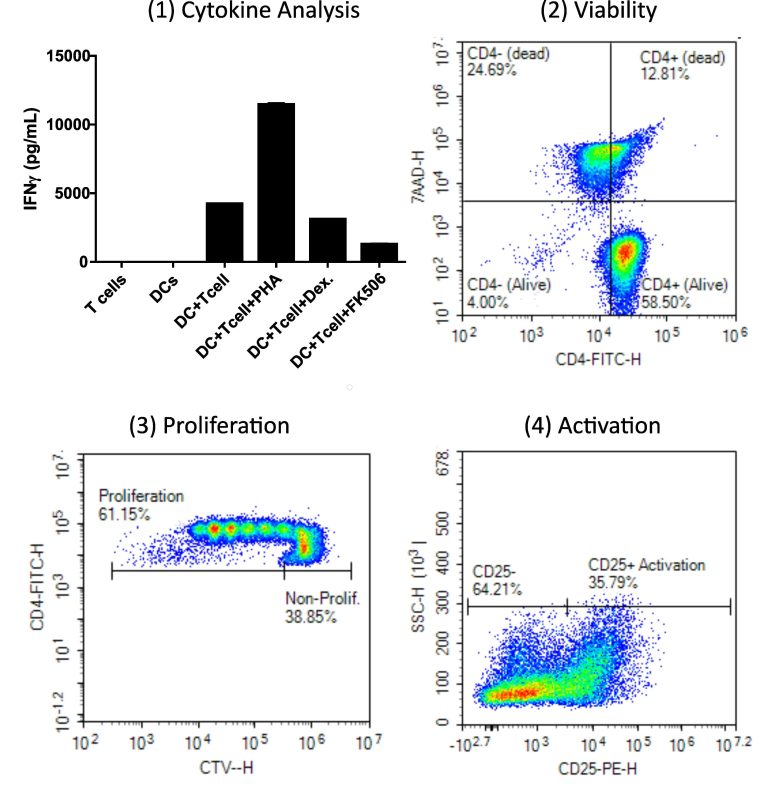 This experiment characterized the effects of co-culturing different ratios of dendritic cells (DCs), loaded with tetanus toxoid (TT), with purified T lymphocytes (1:10, 1:20, 1:40, 1:80, and 1:160) on T cell proliferation and cytokine production.

Pan-T cells were isolated by negative immunomagnetic separation from human peripheral blood mononuclear cells (PBMCs) and were placed in serum free AIMV media. Human monocytes isolated from PBMCs were cultured and matured for 24 hours in media containing IL-4 and GM-CSF (in 10% FBS/RPMI) followed by the addition of tetanus toxoid (5 µg/mL) for an additional 24 hours. At 48 hours of culture, media containing PGE2/TNFα/IL-6/IL-1β was added to the maturing macrophage/dendritic cells. At 72 hours of culture, media was removed and replaced with previously isolated T-cells in AIMV media containing sCD40L and the cells co-cultured for an additional 3 days. 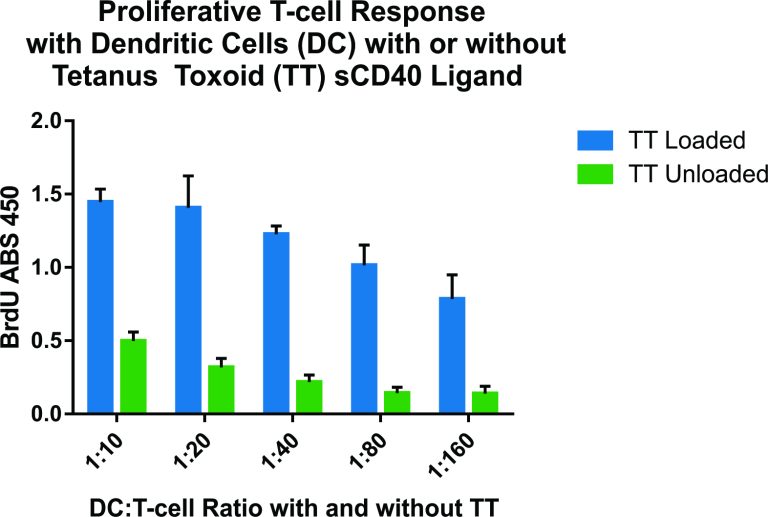 Figure 3 – Optimal stimulation by the TT-loaded dendritic cells was observed at DC/T cell ratios of 1:10 and 1:20. 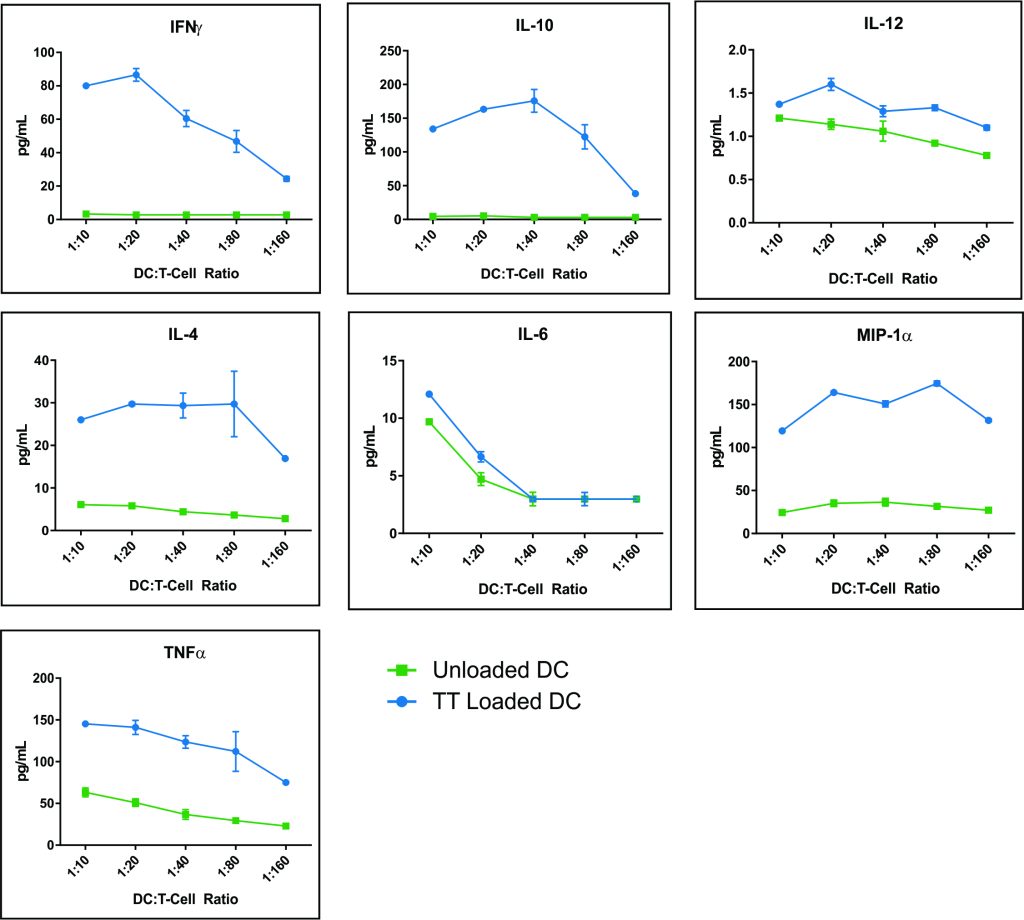 Five different responder human donor PBMC samples were co-cultured with a single human PBMC stimulator in a 7-day one-way allogeneic MLR. The stimulator cells were treated with a DNA crosslinker to arrest proliferation of the stimulator PBMCs before being added to the co-culture. At the end of the culture period, media supernatants were analyzed for TNF-α via Luminex MagPix™ bead technology.

Due to the growth arresting treatment, any proliferation observed is due to the allogeneic response of the five responder PBMCs. Figure 5 below shows the variability of TNF-α responses in the donors (A, B, C, D, and E) subjected to the same individual stimulator (F). Depending on the exact human leukocyte antigens (HLA) that each donor PBMC expresses, and the individual tolerances of each donor, allogenic responses will vary for each donor pair tested. In the above example, Donor #E has the greatest allogeneic response as measured by the inflammatory cytokine TNF-a when cultured with non-HLA matching donor #F. All allogeneic conditions show greater response than baseline (background) single donor PBMC controls for each individual donor. 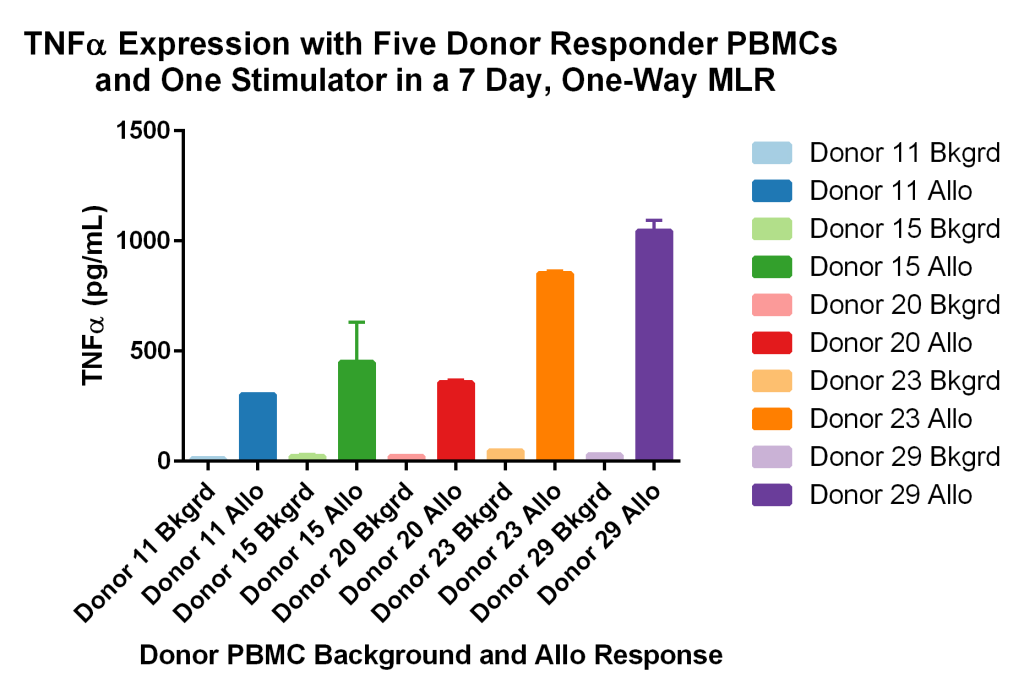 Experience that leads to successful outcomes

As a custom immunology research lab, Xeno Diagnostics’ scientists have a considerable experience with a variety of human/animal cell types and biomaterials and drug compounds. Our scientists have diverse backgrounds and have worked in a wide variety of fields such as drug discovery, immunotoxicology, immuno-oncology, transplantation, regenerative medicine, and medical devices.

Our breadth of knowledge allows Xeno Diagnostics’ scientists to better understand the unique needs of our clients. We have built hundreds of custom assays that are specialized to each of our clients’ fields and products. We specialize in working with our clients to assist them with cell-based assay experimental design as well as data analysis and interpretation. Our scientists are experts in our assay readouts.

If you are in need of a service provider for an MLR, or need additional information, please see the following resources: 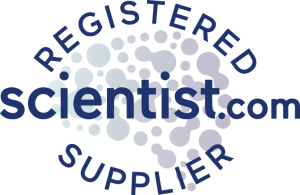 For organizations that prefer to interface through scientist.com, Xeno Diagnostics is a registered supplier. Get started today by submitting a request here.